How To Mute Videos Before Sharing On WhatsApp ( WhatsApp Beta)

This feature that whatsapp seems to introduce is something that most WhatsApp users have been expecting and it’s already for android whatsapp beta users which is for test and if you wish to join the tester you will need to download the beta app that can be gotten from wabetainfo official page.

Contents hide
1. Mute Videos Before Sharing On WhatsApp
2. AlsoRead
3. How To Create Facebook Account Without Phone Number 2023
4. How To Recover Hacked Facebook Account In 2023
5. How to install and Download GBWhatsapp Pro latest version of Android updated
6. How To Send Auto Reply Messages On WhatsApp In 2023
7. How To Mute Videos Before Sharing On WhatsApp Beta
7.1. What do you think about this latest whatsapp feature?

Mute Videos Before Sharing On WhatsApp

Before this was introduced most whatsapp users make use of some editing tools to get rid of voice or mute the video when they feel like the video they want to upload on their whatsapp status does not need to play voice or attached with voice.

Some of these features are what most WhatsApp users are expecting and will like to start making use of. But it’s just being rolled out for android users and not all android users but beta tester users.

🔕 WhatsApp is rolling out a mute video option!

The option is available for all Android beta testers.https://t.co/ns1jkgoaoF

The latest WhatsApp beta v2.21.3.13 is said to be the version of the beta whatsapp version that came with this feature and it’s already rolled out to users that make use of such whatsapp globally.

This feature seems to be one of the WhatsApp features that might drag it’s users back that move to other platforms like telegram and signal messenger app due to the rumor that spread about whatsapp being stealing users data.

That led to sharing data with Facebook which make some of its users to lose courage in making use of whatsapp as of then that make then move to the alternative social media platform but this features might drag it’s users back if it’s as been rolled out officially. 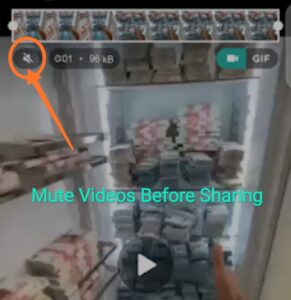 How To Mute Videos Before Sharing On WhatsApp Beta

What do you think about this latest whatsapp feature?

It’s amazing right?  If so let us know below and state your thoughts about the features.

Mtn Night Plan: How To Subscribe To Mtn Night Sub