You can use the glo youtube N50 plan you subscribe to, to watch any video on youtube for one hour as was stated on the plan section.

Other plan are also available which entails from N130 plan and N200 plan and more which all are youtube plan that all available to stream youtube which specific time and validation time and date are stated on all plan when you use the above subscription method to switch to the list and get yourself to stream youtube video as you like. 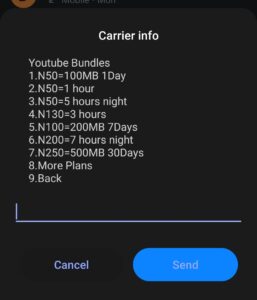 What are your thoughts about this plan?

Let us know in the comments section and join our telegram channel to get related updates.