WhatsApp has finally launched it’s in app digital payment service today in Brazil,after testing a beta version of the payment service in India for a couple of months. Payment on the app is enabled by Facebook pay, which was launched last year and promised to expand to Facebook, Instagram, messenger and also WhatsApp. 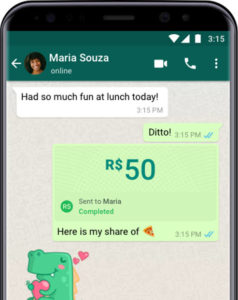 The company noted in a post that “payments are beginning to roll over to lots of people in Brazil and will continue to reach out to more people”. WhatsApp also stated that the payment are open model and will open up to more partners in future.
No fee has been applied to the usage of the service, only businessmen are required to pay a token processing fee of 3.99% in order to receive payments. Users are required to link their debit or credit card their WhatsApp account to be able to use the service, where transactions will be secured with a six- digit pin or fingerprint. The company has also noted that only credit and debit cards from Banco d Brasil, Sicredi, and Nubank will be supported and also payment will be processed by Cielo.

Many had anticipated the launch of the service in India but it came as a surprise and was launched in Brazil instead. This was due to ragulatory issues they face India only allowing it to launch to rather small, limited regiona in India.
India has been considered as WhatsApp largest market speaking of users, India has 400 million 400 million monthly active users of WhatsApp, while Brazil has 120 million monthly active users.
WhatsApp was acquired by Facebook in 2014 for $19 billion and although the company has been under the wing of Facebook since then, it has acquired more than 2 billion users as at February!.
And from its previous records of been adopted for commercial purposes it sure would sky rocket with it new service creating another revenue form Facebook and WhatsApp.

WhatsApp chief executive operator has noted that the platform has been used heavily by small businesses and people, he also said in an interview that “the company looks to grow digital payment, help grow small businesses in the digital economy, and also help in the inclusion of finance”.