Mtn network provider does their own now airtel as came with sim method too. We are about to talk about how to link airtel sim with nin to prevent your sim from being blocked by the network provider which is airtel. We made several posts on how you can link your mtn sim with nin which most of our viewers are done that already.

We are happy to announce to you that you airtel customers now have a way too that they can use to link their airtel sim with Nin which is known as National Identification Number linking of it with sim was just announce by the federal government and it’s compulsory to every sim owner that are resident in Nigeria.

Contents show
1. According To Airtel
2. How To Link Airtel Sim With Nin
2.1. Have you linked your own sim?

As of yesterday on their social media page, they first came with a tweet with a government notice how the airtel sim link notice. 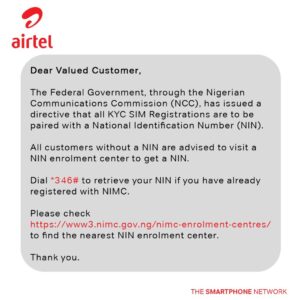 Your National Identification Number (NIN) is important for your SIM registration.

Please use the link to find the nearest NIN enrolment center to get a NIN, if you don’t have one pic.twitter.com/nTISvPBVOk

Which they later came out today and provide their customers with the service as stated.

Don’t wait till it’s too late. Link your National Identification Number (NIN) to your phone number. Just dial *121*1# now to link, and *346# to know your NIN. pic.twitter.com/q5sQ2Dbe6r

How To Link Airtel Sim With Nin

No stress of going to any airtel office to lino your nin they have to make stuff easy for us if you have not gotten your own Nin yet follow the article here to know how to get you and link it with your sim.

Have you linked your own sim?

Let us know view the comments section and stay tuned by joining our telegram channel to get updates for related posts and when other network providers like Glo and 9mobile Might provide the process to get their own too done.