Ever since the recent updates or we call it to upgrade on the latest iOS version 14 which was rolled out on Wednesday many iOS Spotify users as been complaining and calling out of the recent iOS version not showing Spotify widget so we discovered a way which will show you how to add Spotify widget ios 14 and it’s strictly works which will make you enjoy playing of your music and other features.

It was also noticed that ever since the update of the iOS version Spotify widget seems not to appear and Spotify
has not been able to roll-out updates of such Spotify apps that will support and bring the features of the Spotify widget.

All through Spotify’s main app won’t bring up the widget on the recent iOS 14 version but will find out some
third-party apps that will help you to show and display your Spotify widget and how to add Spotify widget.

Contents show
1. Requirements To Get The Spotify Widget Works For iOS 14
2. How To Add Spotify Widget iOS 14 Complete Guide
2.1. Hope this process for you?

Requirements To Get The Spotify Widget Works For iOS 14

The third-party app TuneTrack is said to be the same way or operate in the same way with Spotify, Apple Music,
And Last.fm apps for iOS which we will use to get or bring up our Spotify widget on our iOS 14. 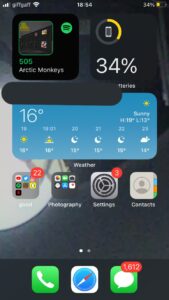 That’s just it, you have successfully added your Spotify widget to your iOS14 device and you can now keep
streaming your music from the home page, and also TuneTrack brings features for the Apple Music widget too
which displays the playlist view with the help of the app.

Lastly, an update will be rolled out to view the app every 5min or you run the update yourself.

There are also related third-party apps on the app store which you can also use to display your widget both on
Spotify and Apple Music, apps like App clip, home screen widget, and more. That’s just how to add a Spotify widget to iOS 14.

Hope this process for you?

And also join our telegram for fast updates on our recent posts and others.